Cluny Sisters have a MISSIONARY CALL and are thus in mission around the world … standing in solidarity with the ‘other’ wherever there is a little good to be done. We seek:

As Sisters of St. Joseph of Cluny in the Province of USA and Canada, we are called to bring hope and compassion to our anguished world. We commit ourselves to the transformation of our world through communal contemplative prayer and to make the difficult choices which will release the energy and gifts of each sister for mission. (Assembly 2002)

Flowing from the Mission Statement, the Assembly of 2009 affirmed the following DIRECTION STATEMENTS:

We commit ourselves, at a personal, communal and province level, to work towards the liberation of the unfree. We begin with ourselves, our communities, and our associates. We direct our efforts in a special way to: Education, the Environment, the issue of Trafficking and the issue of Race / Class Discrimination. (Assembly 2009)

Affirming the gift of our Cluny Internationality, we commit ourselves to dialogue with the Generalate in discerning the future; a continued response to the needs of the mission; advocate for NGO status for the congregation; and to expand our present relationships with other Provinces. (Assembly 2009)

What are Cluny Sisters Saying about Blessed Anne Marie?

The Early Years: A Historical Context

Anne Marie Javouhey was born in 18th century France, a time which Dickens characterized as “the best of times, the worst of times.” Like our own twentieth century world, 1779 was a time of political, social and religious upheaval. While the wealthy dined in lavish splendor, oppression, injustice and extreme poverty were the lot of the ordinary folk living in the cities of Europe.

As Anne Marie was growing up in the prosperous Burgundian farming village of Chamblanc, France moved irrevocably toward the French Revolution. Deeply rooted in the farming traditions of faith-ﬁlled Catholics, Anne Marie learned prayer, generosity and conviction from her parents, Claudine and Balthazar. Being the strongest personality of her brother and three sisters, it soon became evident that she had a keen intelligence, a perceptive understanding of human behavior, and a compelling charm.

When Nanette, as her family called her, reached the age of ten, the French Revolution changed history. The divisions existing among the social, political and economic classes had grown deep and bitter. The violent uprising of 1789 was the response to centuries of oppression and injustice. Crops had failed more than once, plunging many into poverty and hunger. When one year, the dense ash clouds from the volcanic eruption in Iceland so overshadowed the land that the crops across the farmlands surrounding Paris failed due to the lack of sunshine, the tipping point was reached.   Continue reading the full document

Blessed Anne Marie and the Holy Will of God

Anne Marie Javouhey’s life shines brightly as an example of one for whom baptism became the challenge to putting faith in action. From a faith that sprang from the depth of her relationship with the God who created her in love, she heard the call to share in the proclamation of the Good News of salvation. She truly believed that as a human being who was also Christian, her vocation was to collaborate with God in the loving, creative process already begun at the moment of Creation–the same desire to collaborate that she recognized in the longing Jesus expresses to do the will of the Father. From her own deep passion sprang Anne Marie’s desire to imitate Jesus in the pursuit of the Will of God.

The Letters of Blessed Anne Marie Javouhey are a wonderful source for exploring her understanding of this will. Through them we see the gradual evolution of her thought. She came to see that God’s will is revealed, as she put it, ‘one drop at a time’. Experience taught her that this will must be discerned and that this weighing of the pros and cons of a situation in the light of the Holy Spirit requires us to trust God even to the extent of making decisions contrary to the wishes of authority. Furthermore, God’s will is revealed through people and events and often can be gauged by the success or failure of an enterprise. God’s will can never be totally clear to us, so seekers must “walk by faith and not by sight” trusting in God’s mercy.  Continue reading the full document

A Contemplative in Action

If ever there lived a contemplative in action it was certainly Mother Javouhey. Her whole life swung back and forth with the regularity of a pendulum between listening to God and carrying out what she discovered to be God’s will for her. God’s will was her food, as it was the food of Jesus. “The Holy Will of God” was her call to action. “The Holy Will of God? Ah! That is everything!”,she once wrote to the sisters. However, her experience was that “God gives us enlightenment in little doses. Doing the Holy Will of God might be “everything”, but it is not necessarily easy! Life taught Blessed Anne-Marie that it requires living in a perpetually listening mode. It demands patience and tenacity in the face of difficulties. It sometimes rests on the willingness to take risks when others might be counseling a prudence that has nothing to do with the virtue but a lot to do with timidity.  Continue reading the full document

Living in Tune with All of Creation

The deepest cause of the present devastation is found in a mode of consciousness that has established a radical discontinuity between the human and other modes of being and the bestowal of all rights on the humans. Thomas Berry

For Father Thomas Berry, CP our alienation from the earth is what has led to our human audacity in exploiting all other communities in the universe to our own ends. But the prophetic voices of people like Berry are finally awakening us to the need for a new approach to Mother Earth. Today, for a growing number of people, the greening of our planet is no longer considered just an “in” trend but rather an absolute must for our survival. Humans are not above all other earth communities. We are one with them, sharing in the life systems that keep us all a’live. The God who created us, created us to live in sustainable harmony with one another.   Continue Reading the full document

What Would She Say About Living Through a Pandemic

Coming to the end 2020, with the promise of vaccines and infection rates going down in some areas and the rates go up in others, we are concerned about a new mutation of the virus. We have mourned and are still mourning those who have died. We do our best to support those who are bereaved, exhausted medical personnel and others who serve, we contribute to organizations reaching out to those in need.

We might well ask, when will it end? What will the end be like? And what is God’s Will for me in all this?

Blessed Anne Marie did not live through a pandemic, though in her day tropical diseases were lethal and she nearly succumbed in Sierra Leone. However, her life was punctuated with seemingly unsurmountable obstacles, some political like the revolutions in France during her lifetime, others personal. She did not set out to overcome them all, for she knew that her call was to collaborate with God in his great loving plan. That was her understanding of God’s Will. That was her dream. Her dream gave her a broad vision, challenged her to use all her gifts with courage, and allowed her to patiently suffer persecution when there was no way out.  Continue reading the full document

“To do the Will of God, surely that is everything.”

Cluny spirituality plunges us into the Gospel call of Christ, sent to do the Father’s Will. It incorporates us into the Church’s vast mission of evangelization and invites us into ongoing discernment of our response to the signs of the times.

“Our union with Christ, renewed each day in prayer and the Eucharistic sacrifice, intensifies our desire to proclaim the Good News. It encourages us to speak as well as to witness by our very presence … reechoing the teaching of the Word Incarnate and stressing the Father’s love for all.” (Rule of Life, Art. 9)

Blessed Anne Marie was at the service of all. “She would have liked to be everywhere at once, never content while there was suffering to be relieved and people to be saved.” (Rule of Life, In the Radiance of Anne Marie Javouhey) Following the call of Blessed Anne Marie, we stand in solidarity with the ‘other’ without distinction, wherever there is a little good to be done. This missionary spirit calls for total availability, an inner liberty to say yes, and a readiness to leave all for the sake of the mission

“Coming from different cultures and backgrounds, we work together, each contributing her talents in a spirit of collaboration.” (Rule of Life, Art. 8) Cluny Sisters are called to be a sign for our world through the internationality and diversity that exists within our community life. Christ creates a communion among us and opens us to the mission. It is with Christ that we build community, a place of personal growth, spiritual support, conversion and pardon, discernment, shared mission and caring.

A Spirituality for our Times – Part 1 (PDF)
Regina Brunelle, SJC

A Spirituality for our Times – Part 2:
Reading the Signs of the Times: Globilization (PDF)
Regina Brunelle, SJC 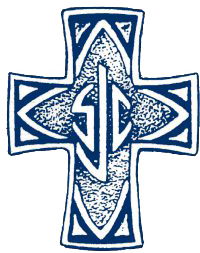 The emblem is molded in the sign of the cross, that being the beginning, middle and end of all that we do in prayer, ministry and community. It is made of pewter, which is a mixture of different ores forming a simple alloy; a sign of our unity in diversity; the giftedness of many cultures in scattered missions; beautiful simplicity in a complex world. Pewter is a soft metal. A sign of vulnerability with an openness to be marked with the joys and sufferings of humanity … an ancient metal of the poor.

The emblem’s four extremities bear the imprint of gothic arches, symbol of our rootedness in the Church through our baptism and religious consecration, embracing all peoples from all lands.

On the back, hidden as it were, is our motto – The Holy Will of God – which is made known to us and through us in ordinary, everyday events and actions; transforming, challenging, nurturing, guiding.

In the center are the initials SJC (St. Joseph of Cluny), symbolizing that we as Cluny Sisters become the body of Christ, embracing both passion and death so as to experience and share life and resurrection. 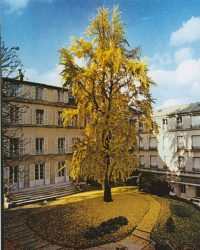 This Gingko tree was planted in 1848 by Blessed Anne-Marie on the Motherhouse grounds
in Paris, France. Firmly rooted in the fertile earth, exposed to sun and wind, this gingko has flourished for 160 years. It is a symbol of longevity, peace, hope and healing.

(The Ginkgo tree is seen as a phenomenon, a wonder of the world. It is an object of veneration, a sacred tree of the East, a symbol of unity of opposites. By some it is seen as a symbol of changelessness, possessing miraculous power, bearer of hope and of the immeasurable past, a symbol of love. Because of all its properties it is associated with longevity. ) 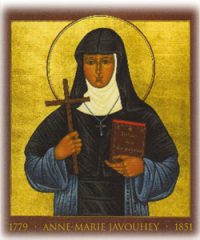 Having read the life of Blessed Anne-Marie Javouhey and after much prayer and fasting, Sister Stephanie’s hand created a beautiful and sacred image of our Mother Foundress. The icon depicts Blessed Anne-Marie with the Constitutions of the Congregation in one hand and the cross of Evangelization in the other. The wood of the cross is also representative of the wood of Mana, the settlement founded by Blessed Anne-Marie in French Guiana during her work for the abolition of slavery.

While copies have been made and distributed throughout the congregation, the original icon was presented to Sister Marie Noel Lefrancois, Superior General at the time, at the Motherhouse in Paris, France.