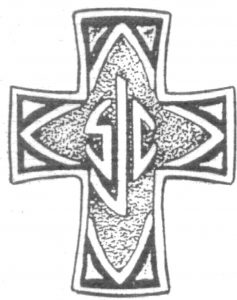 Patron Saints of the Congregation

Following the example of Blessed Anne Marie Javouhey, we turn in confidence to Saint Joseph, our protector and model of the interior life. We pray especially to the patron Saints of the Congregation: St. Teresa, St. Martin, St. Francis Xavier and St. Peter Claver. We learn from them to unite intimacy with Christ and courageous zeal in the service of the mission. (General Chapter Ordinances, 2000) 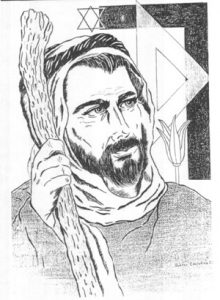 Anne Marie had chosen Bernard as patron of the first chapel dedicated in Chalon in 1807. She was thus acknowledging her connection with the Trappist monk Dom Augustin de l’Estrange and her experience as a novice at Val Sainte. But the priest who was to celebrate the first Mass questioned her choice. “St. Teresa always dedicated her houses to St. Joseph,” he said. “Besides, my name is Joseph!” Recalling the great saint’s revelation to her of her vocation Anne Marie acquiesced without further ado. Henceforth, Joseph was to be the patron and provider of the congregation. His feast is celebrated on March 19th. 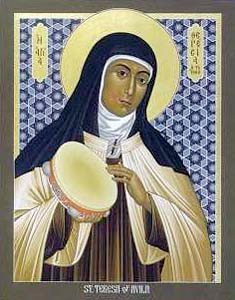 Teresa was the great reformer of Carmel who worked to reestablish the Carmelite way of life as it was lived at its origins. During her lifetime, she established many reformed houses of the Order all over Spain and, with St. John of the Cross, was also instrumental in bringing the reform to the male Carmelite Order. The saint is said to have come to the young Anne, a postulant at the Convent of Charity in Besançon, during a time of struggle to know God’s Will for her. Teresa showed her many children of color saying, “These are the children God is giving you.” She told Nanette that she was to found a new congregation that would care for these children. The Church celebrates the feast of St. Teresa on October 15th. St. Teresa teaches us to seek God in all things and to unite contemplation and action.” Under her protection and that of St. Marin. St. Francis Xavier and St. Peter Claver, the Congregation pursues its mission in the world in order that “the whole human race might become one people of God, form one body of Christ and be built into one temple of the Holy Spirit. ( Rule of Life, p. 15) 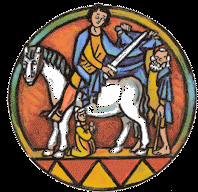 During the 18th and early 19th century, Martin was a very popular saint in France, especially in Burgundy where Anne-Marie was born, probably because he was the patron of vintners as well as soldiers. Born in Hungary in 316 to pagan parents, he was conscripted in the army because his father was an army officer. He later became a Christian and a conscientious objector. The charges brought against him were eventually dropped and Martin was free to become a monk. In 360 he settled in Gaul (France) and was soon joined by disciples. Together, they founded the first monastery in Gaul. In 371 the people proclaimed Martin Bishop of Tours. He served as a bishop –monk and converted many pagans to the faith. He died in 397. The biography of Martin written by his friend, Sulpicius Severus, relates the many good works and wondrous deeds that made him such a popular saint. In art, he is usually shown on horseback, handing his cloak to a poor man. Anne-Marie saw in this saint, both a model for evangelization and a protector as she began working to save the faith from the destructive influences of the French Revolution. The fact that she was baptized on November 11, the day the Church celebrates his life, made him all the more significant to her. 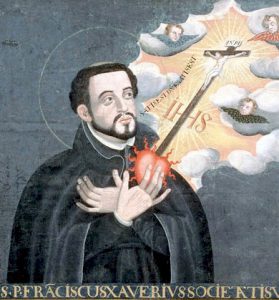 Born in Navarre April 7, 1506, St. Frances Xavier died on the Island of Sancian near the coast of China December 2, 1552. He was one of the first members of the Society of Jesus (Jesuits). St. Ignatius sent him to evangelize the Indies in 1541. He lived out his life bringing the gospel to the peoples of India and Japan. It is truly amazing that one man in the short span of ten years (May 6, 1542 – December 2, 1552) could have visited so many countries, crossed so many seas, preached the Gospel to so many nations, and moved so many people to embrace the gospel. His zeal for proclaiming the Word has never been matched. Considered the greatest missionary since the time of the Apostles, he was an attractive model for the missionary zeal displayed by Anne Marie and her daughters. Francis Xavier was canonized with St. Ignatius on .The Church celebrates his life on December 3. 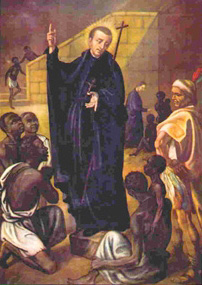 (1580-1654) was a Spanish Jesuit missionary to Latin America. He is known as the “Apostle of the West Indies” and the “Slave to the Slaves. Haunted by a vision of going where he was really needed, Claver left his theological studies before their completion and in 1610 went to Cartagena, New Granada (now Colombia). In his profession he stipulated that he would “never admit any inferiority in the Negro slaves,” and so that there would be no doubt of this, he proclaimed himself their slave, adding to his signature ethiopium semper servus (slave of the Negroes forever). For the remaining 38 years of his life, Claver lived in Cartagena, one of the major Caribbean ports in Latin America to which slaves were imported. He had no social program but simply geared his life to the primary needs of the often sick and broken slaves who arrived on American shores. He was not a “revolutionary” priest, intent on changing the fabric of society; he simply cared for the slaves and exhorted the slave masters to be humane. He died of the plague on Sept. 8, 1654 and was canonized in 1887. Three years later he was declared the patron saint of the missions to the Negroes; hence his adoption as a special patron by the Cluny Sisters. We celebrate his feast on September 9.

Cluny Devotion to the Sacred Heart

Anne Marie’s devotion to the Heart of Jesus came from her mother. Claudine Parisot was a very devout Catholic wife and mother who instilled this devotion in her children at a very early age. When Claudine was pregnant with Anne-Marie, the baby used to move in her womb when she honored the Sacred Heart on Fridays. This happened so much, in fact, that she began to pray with greater fervor and confided this baby to the infinite love of Jesus. She often wondered what God had in mind for her unborn child. After Anne-Marie was born, Claudine had the secret conviction that her eldest daughter was made to do great things for God and his much persecuted Church. It was a blessing for all that Claudine impregnated the childhood of Anne-Marie and her brothers and sisters with an atmosphere of devotion and love for the Heart of Jesus. 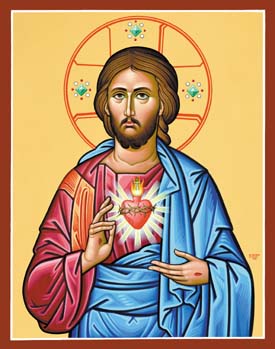 During her early twenty’s, Anne-Marie wanted more than anything to give her life to God as a religious, but she kept encountering obstacles. In 1803 the way finally seemed clear and she set off for Val Sainte, a Trappistine monastery in Switzerland. There she would be under the direction of Dom de Lestrange, a wise man of God, who quickly saw the cloistered life was not for her. “The good God has His plans and we must carry them out,” he told her. She left Switzerland and returned to France to establish there a branch of the Trappistine Third Order. Though her plan was never realized, her experience with he Trappistines brought together for her both a powerful attraction to the Holy Will of God and an affiliation to the Association of the Sacred Heart, which was bestowed on the members of the Trappistine Order.

Anne Marie and those who banded together with her were women of their time. Devotion to the Sacred Heart was well known in Burgundy because of the revelations received in 1673 by St. Margaret Mary Alacoque in the convent at Paray-le-Monial. None of the attempts of the Revolution to stamp out the Catholic faith managed to destroy the popular devotion to the Sacred Heart. As soon as her own Congregation came into existence on May 12, 1807, Blessed Anne-Marie wanted to consecrate it to the Heart of Jesus to show her gratitude and to ensure the support of his divine Heart. She chose the feast of the Sacred Heart, which fell on June 6th that year. Barely a month after their religious profession, the Sisters placed themselves and the congregation under the protection of the Heart of Jesus. The celebration took place in the little chapel of the community in Chalon. The Blessed Sacrament was exposed for the whole day and in the evening Mother Javouhey and the other members consecrated themselves to the Sacred Heart. There were nine of them in all – the entire Congregation!

This consecration has been renewed annually ever since. The vitality of Cluny devotion to the Sacred Heart in the present day remains strong. At last count, in 2003, 17 Cluny communities spread around the world, including the Motherhouse, are named for the Sacred Heart. Over 300 hundred Sisters have chosen the Sacred Heart as part of their religious name in a variety of forms: Heart of Jesus, the Divine Heart, the Eucharistic Heart etc.

Devotion to the Sacred Heart Today

What meaning does devotion to the Sacred Heart hold for us today? In the past century or so, the Sacred Heart was honoured through the First Friday devotions, Adoration and Benediction of the Blessed Sacrament, the praying of the Litany of the Sacred Heart and other prayers addressed to the Heart of Jesus. For many today, these devotions do not hold much meaning. Perhaps the Holy Spirit is calling the Church to a different form of devotion, more directly rooted in the Gospels. In both the Hebrew and Christian Scriptures the heart is the essence of being, the seat of all loving. The Heart of Jesus is the Source of our learning to love. From that Heart, we discover how to live the two great commandments to love God and our neighbour by which Jesus sums up all his teaching. In order to live this teaching fully we must discover that Heart, we must enter into it. There is no better way to do this than to fix our gaze on Jesus as he is revealed to us in the Gospel. What do we learn about the Heart of Jesus from his words and actions in the Gospels?

“As I reflect on the words and actions of Jesus in the Gospels, I ask Jesus to reveal to me: how my heart – the essence of my being – reflects his; how my heart needs to change in order to better resemble his?”

December 8 – Consecration to the Immaculate Heart of Mary

As the Ordinances of the 2000 General Chapter say, “The Virgin Mary has a special place in our lives. … Each year, on December 8th, the communities renew the act of donation of the Congregation to the Immaculate Heart of Mary. (Pg. 27). Let us pray…

“Most Holy Virgin Mary, Mother of God,
to you we come as to our Queen and Mother,
confiding ourselves wholly to your loving Heart.
To this pure and Immaculate Heart of yours
we consecrate our persons, our prayers, works and sacrifices;
our life and our death, all that we have and all that we are.
To you we commend the holy Catholic Church;
Guide her in her search for God’s Will
and strengthen her in living your “Yes” in today’s world.
To your love we commend the whole world.
Grant that all men and women may understand and fulfill
the precept of your Divine Son: “Love one another,”
in order that true peace may be established through a justice
that is grounded in Christ Jesus Our Lord,
Amen.”